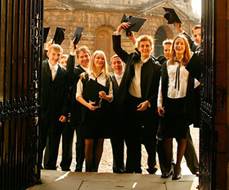 A public institution is owned and operated by a go­vernment, either a state or a municipal government. The government appropriates large sums of money for the institution's expenses. Yet these sums are normally not suf­ficient to cover all expenses, and so the institution is partially dependent on student fees and on gifts.

Of the nation's nearly 1,900 institutions of higher learn­ing roughly one-third are state or city institutions. About 1,200 are privately controlled. Approximately 700 of these are con­trolled by religious groups. Less than half of these institutions ate liberal art colleges and universities which stress the lan­guages, history, science and philosophy. The rest are profes­sional and technological schools and junior colleges.

A college is generally defined as an institution of higher learning which offers a course of instruction over a four-year period, and which grants a bachelor's degree at the conclusion of studies. As part of university, a college graduate is distinguish­ed from a graduate of professional school. However, the profess­ional schools in some universities are called colleges.

A college prepares the student for two things: either graduate study leading to master's or doctor's degree or a job immediately after graduation. A student who majors in business administration for example, may be fully prepared for a career in business when he has finished college.

On the other hand, a student majoring in psychology often must do a great deal of graduate work before he is competent in this field.

The average college course of study is 4 years. The academic year is usually 9 months or 2 terms of four and a half months each. Classes usually begin in September and end in June.

Harvard College was established in 1636, with the principal purpose of providing a literate ministry1 for colonial churches. It was a small institution, enrolling only 20 students in 1642 and 60 in 1660. It soon be­came more than a theological training school and es­tablished itself as a liberal arts college. The next insti­tution of higher learning established in the American colonies was the College of William and Mary, which opened in 1693 at Williamsburg, Virginia. Other col­leges were founded in the next century, but all of them remained small schools for long periods. Students en­tered at the age of 14 and remained until they were 18, and the curriculum, while rigidly academic and classic was by modern standards rather secondary in nature.

Private colle­ges and universi­ties were estab­lished in various states. The first state university was the Univer­sity of Virginia, founded in 1819. Some state uni­versities have lar­ge endowment fu­nds which pro­vide a substantial portion of their support. Other sources of income are student fees, gifts and endowments.

In general, higher education in the USA may be di­vided into two broad fields: liberal arts and professional. Each of these fields may be further subdivided into un­dergraduate and graduate levels. The liberal arts program, on the undergraduate level, may be a two-year junior college course, or a four-year course leading to a degree of Bachelor of Arts or Bachelor of Science. The four-year course is usually subdivided into a lower division (which may be called the junior college), consisting of the two first years, and the upper division, which is the last two years. The first two years continue the general education and specialization begins in the third year. Then the students may go on to graduate school and with a year or two of further study get a Master's degree. After another year or two of study and research, they may get a still higher degree as Doctor of Philosophy (Ph.D.).

The student's progress is evaluated by means of tests, term works and final examinations in each course. The student's work is given a mark, usually on a five point scale. Letters indicate the level of achievement. ‘A’ is the highest mark. ‘F’ denotes a failure.

10. Skim through text 4D and say which of its paragraphs gives information about: