Read text 3F and translate it.

Text 3F. Yekaterinburg – the capital of our region 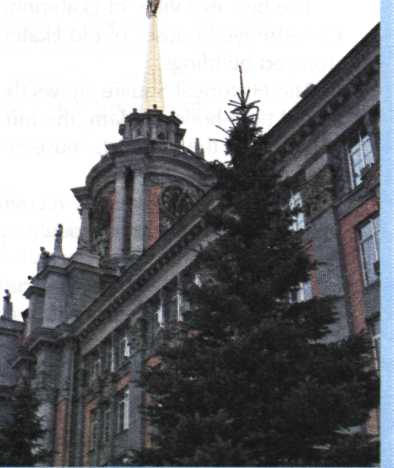 Founded at the beginning of the 18th century Yekaterinburg was developed around a small metallurgical plant. The plant was constructed under the supervision of V. Tatischev, a mining engineer who was sent to the Urals by Peter I. It was put into operation on the 7th of November, 1723, and this date is considered to be the birthday of our town.

The bird-eye view of Yekaterinburg reveals contrasts in its architecture. One-storeyed houses of old Yekaterinburg stand next to the modern multi-storeyed buildings.

A great contribution to the development of the town was made by M. Malakhov, a prominent architect and a graduate of Petersburg Academy of Arts. Over 60 houses were built to his designs. There are some new districts in our city. There are blocks of flats in the Southern-Western part of Yekaterinburg and a complex of buildings of the Region Hospital in Volgogradskaya Street.

Another residential area is Komsomolsky district with its famous ‘Kamennye Palatki’ the monument of nature and archeology. It is one of the most picturesque places in our city.

The Historical Square shows the city's cradle with an old time-honored dam, the mint and the mechanical works. Now there you can see the Fine Arts museum where ‘the Ural wonder’, the unique Kasli pavilion is.

Yekaterinburg is an industrial city. There are more than 2000 industrial enterprises, among them the Verch-Iset metallurgical and metalworking plant, one of the oldest in the Urals. It should be stressed that Yekaterinburg is also one of the leading centers of machine building. Mining school brought up brilliant experts, Ivan Polzunov being one of them. One of the most well-known machine-building plants not only in the Urals but also abroad is the Uralmash. It was built in 1935. The Uralmash made a great contribution to the victory of our people in the Great Patriotic War. Many workers gave their lives in the battle. In their honor a memorial was built near the plant.

The coordinating center of the Urals science is the Urals Department of the Russian Academy of Science. It contains a lot of various institutes with their numerous laboratories.

Yekaterinburg is a city of students. There are more than 15 institutions of higher learning there, the oldest being is Ural Federal University, one of the largest in Russia.

Visitors to Yekaterinburg are always warmly welcomed by citizens and can visit a lot of places of interest, such as the Museum of Regional Ethnography, the Geological Museum, the Opera House, the Drama Theatre, the Circus, etc.

Yekaterinburg is also called a theatrical city. There are many theaters, cinemas and palaces of culture. The Opera House was constructed in 1912. The designers took the Milan Opera House in Italy as a model for it. In 1928 the building of the theater was reconstructed. There is also the Playhouse (Drama Theater) on the bank of the river Iset, the Theater for Young Spectators. It is very popular among the children and young people. The building is of modem style. The Philharmonic Society with its musical concerts also attracts many visitors. One cannot but mention our museums. The works of art are displayed at the Museum of Fine Arts, which is a part of our historical square. The Urals Geological museum enjoys truly great popularity. It contains a great collection of minerals. The museum shows the visitor not only stones in their pure state but also numerous articles of decorative and applied art made of them.

One of the largest libraries in the city is the Belinsky Public library.

Sport is very popular among our people. The Central Stadium in Repin Street is provided with all facilities for holding football and hockey matches. The Uktuss Mountains with famous Uktuss ski-jump have repeatedly been the place for competitions of sportsmen from various countries.

The beautiful Urals nature especially in winter provides good opportunities for going in for sport.

We are proud of the capital of our region very much.

30. Imagine, that you are to show the capital of our region to a group of foreign students. What places would you show them? What information could be presented? Act as a guide. Get ready to answer the questions.

31. Have you ever thought what personal contribution to the life of the Urals, to the life of your native town you can make? How can you be useful? Discuss it with your group mates.