Poster from one of the early "Cold War" Bond movies

WHO IS JAMES BOND?

BOND IS BACK AGAIN.... and the latest Bond film is an enormous box-office hit (as was expected). But who is James Bond, and where does he come from ? Author Ian Fleming, the creator of James Bond, told us something about the origins of the world's most famous secret agent....... 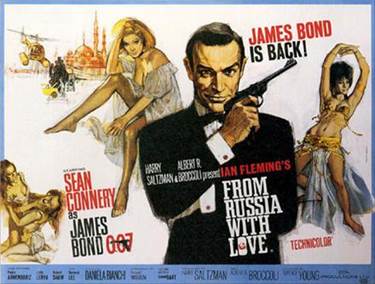 Poster from one of the early "Cold War" Bond movies

In one of the first Bond novels, Ian Fleming tells us that James Bond - the classic “Englishman” - was the son of a Scottish father and an Oriental mother. But perhaps this was not really true.
The title of the 19th Bond film, “The World is Not Enough”, was based on the Latin motto of the Bond family, which is mentioned in one of the early novels. However, it now appears that the motto is not that of the Scottish Bonds, but that of a different Bond family, who came from the South West of England. So perhaps, Bond really is English, not Scottish, after all. Who knows?
Bond went to school in England, anyway - to Eton College, the same school as his creator Ian Fleming. This is where Princes William and Harry were educated, and also many British Prime Ministers, including David Cameron! It is a school where young people learn how to move in high society, like Bond does so well.
After leaving school, Bond did not go to university - it wasn’t necessary in the 1950’s......
Oh? You didn’t know Bond was so old? He doesn’t look it, granted, but he is! Like a few other famous people, he seems to have found the secret of eternal middle age (we can’t call it “eternal youth”, can we?”).

Bond joined the British Secret Service, where he soon got promoted to the top of the spyrachy, the “double O” category. From then on he was 007, “licensed to kill”, and so began a career which would take him to all the corners of the earth.
In the early days, Bond’s role was quite clear. He was working for the West, and his main enemies were men from the KGB, and other dangerous organisations. Since the end of the Cold War, the role of MI6 has changed, and Bond’s job profilehas changed with it. Now his main enemies are the big bosses of organised crime and international terrorism.
Unlike the Cold War, organised crime is unlikely to come to an end - at least, not in the near future. We can therefore be sure that James Bond, the best-known English fictional hero of the 20th century, has many more exciting adventures ahead of him.
Hollywood has already begun making sure of that! The original films were based on the fifteen novels written by Ian Fleming; but after the last of these was made into a film, it was clear that Hollywood was not going to stop! Bond films are too popular and too profitable to abandon. So Holywood has invented new James Bond stories...
In many ways, Bond has changed a lot since the early days. To start with, several different actors have played the part of Bond, most notably Sean Connery, Roger Moore and today’s Daniel Craig; but over the years, Bond movies have become more and more fantastic. Fleming’s original character was fantastic, because he always came out alive; his adventures were incredible, but they were based on some sort of realism. Bond’s original car (his Aston Martin DB5) had gadgets, but they were all plausible! They were gadgets that would let him escape if he was being chased.
More recently, Bond has had cars that can fire missiles from the headlights, and do other remarkable things! In a sense, the modern Bond is Agent Gadget - and the people who try to get him have some even more amazing gadgets - like the enormous circular saw that hangs under a helicopter, cutting through everything that gets in its way (except Bond, of course!).
In the next Bond films, there will surely be lots more amazing things; but Bond will continue to be the same, cool, calm and collected – the classic Englishman.; Craig is unlikely to be the last 007, and Bond will doubtless go on entertaining us for many more years!

WORDS
novel: story - motto: proverb, phrase - granted: that is true - spyrarchy: an invented word made from spy and hierarchy (hierarchy rhymes with spyrarchy) - career : professional life - MI 6 - The British Secret Service - - job profile: the work he has to do - ahead of: in front of - plausible: possible, realistic - headlights: main lights - saw: a sharp instrument for cutting - collected : sure of himself -