Reflection seismology is extensively used in exploration for hydrocarbons (i.e., petroleum, natural gas) and such other resources as coal, ores, minerals, and geothermal energy. Reflection seismology is also used for basic research into the nature and origin of the rocks making up the Earth's crust. Reflection Seismology is also used in shallow application for engineering, groundwater and environmental surveying. A method similar to reflection seismology which uses electromagnetic instead of elastic waves is known as Ground-penetrating radar or GPR. GPR is widely used for mapping shallow subsurface (up to a few meters deep). The reflection method is at present the most accurate method of determining depths of formations in oil exploration. 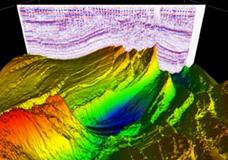 Today, 3D-seismic technology is applied to solve problems and reduce uncertainties across the entire range of exploration, development and production operations. Surveys are used to characterize and model reservoirs, to plan and execute enhanced-oil-recovery strategies and to monitor fluid movement in reservoirs as they are developed and produced. These capabilitieshave been made possible by advancements in data acquisition, processing and interpretation.

Full-Vector Wavefield Imaging which includes shear and compressional waves (S- and P-waves, respectively) to capturerock properties between wells. P-waves are influenced not only by rock frame properties but also by the nature of the fluid in the rock pores. S-waves are insensitive to the type of fluid in sediments. Full-vector wavefield imaging makes it possible to “see” through gas chimneys that plague economically important areas. These chimneys which are caused by free gas in the sediments destroy P-wave continuity but hardly affect S-wave reflections. Combining P- and S-waves discriminate among sands and shales and is valuable in helping to detect fractures.

Magnetic Methods | Place the sentences according to the order of their appearance in the text. | Electrical Methods | Equipotential-line and potential-profile methods. | Notion of DC resistivity method | WORDLIST | Terms and Vocabulary | Reflection Seismology | Form nouns from the following verbs. | Match the pictures with the extract for illustration of which they can serve. |