Large-scale geological structures that might hold oil or gas reservoirs are invariably located beneath non-productive rocks, and in addition this is often below the sea. Geophysical methods can penetrate them to produce a picture of the pattern of the hidden rocks. Relatively inexpensive gravity and geomagnetic surveys can identify potentially oil-bearing sedimentary basins, but costly seismic surveys are essential to discover oil and gas bearing structures.

More detailed information about the rock layers within such an area can be obtained by deep echo-sounding, or seismic reflection surveys. In offshore areas these surveys are undertaken by a ship towing both a submerged air or water gun array, to produce short burstsof sound energy, and a set of streamers of several kilometres length. Each streamer contains a dense array of hydrophone groups that collect and pass to recorders echoes of sound from reflecting layers. The depths of the reflecting layers are calculated from the time taken for the sound to reach the hydrophones via the reflector; this is known as the two-way travel time. The pulse of sound from the guns radiates out as a hemispherical wave front, a portion of which will be reflected back towards the hydrophones from rock interfaces. The path of the minute portion of the reflected wave-front intercepted by a hydrophone group is called a ray path. Hydrophone groups spaced along the streamer pick out ray paths that can be spaced to specific points on the reflector surface. Graphs of the intensity of the recorded sound plotted against the two-way time are displayed as wiggle traces, in which each trace represents a geophone on the surface. Peaks and troughs on the wiggle represent up and down movements of the geophone, in which the vertical axis of the wiggle is two-way time, and the amplitude of the peak or trough indicates the magnitudeof geophone movement. Generally, peaks face right and are colored black to make it easier to interpret the line. In variable density displays, shades of gray are used to represent amplitude instead of peak/trough deflection.

The Society of Economic Geophysicists has a convention that troughs represent upward motions of the ground and peaks represent downward motions. However, many companies have their own conventions. At shallow burial depths, troughs (upward expansion) represent low-velocity sands, peaks (downward troughs) are high-velocity shales. With greater burial, sands become faster than shales, and troughs will switch to represent shales.

Today, dual-polarity displays of variable area data are common, where troughs are colored red to indicate low-velocity sands at shallow depths, peaks are colored black (to indicate high-velocity shales, and transitions between peaks and troughs are not shown at all. The troughs are then reversed, and superimposed on the original traces so that both peaks and troughs face the same direction. Dual polarity displays of variable density are also common. 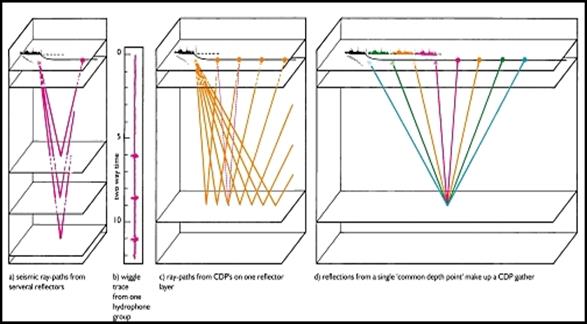 Seismic recording at sea always uses the common depth point (CDP) method. A sequence of regularly spaced seismic shots is made as the survey vesselaccurately navigates its course. Shots are usually timed to occur at distances equal to the separation of the hydrophone groups. In this way up to 120 recordings of the echoes from any one of 240 reflecting points can be collected. Each represents sound, which has followed a slightly different ray path, but has all been reflected from the same common depth point.

Electrical Methods | Equipotential-line and potential-profile methods. | Notion of DC resistivity method | WORDLIST | Terms and Vocabulary | Reflection Seismology | Form nouns from the following verbs. | Match the pictures with the extract for illustration of which they can serve. | Метод преломленных волн | Applications of Reflection Seismology |