Processing recordings involves many stages of signal processing and computer summing. Firstly, wiggle traces from a single CDP are collected into groups. Displayed side by side in sequence they form a CDP gather. Reflections from any one reflector form a hyperbolic curve on the gather because the sound takes longer to travel to the more distant hydrophones. This effect is called normal move out (NMO). Correction is needed to bring the pulses to a horizontal alignment, as if they all came from vertically below the sound source. The separate wiggle traces are added together, or stacked. 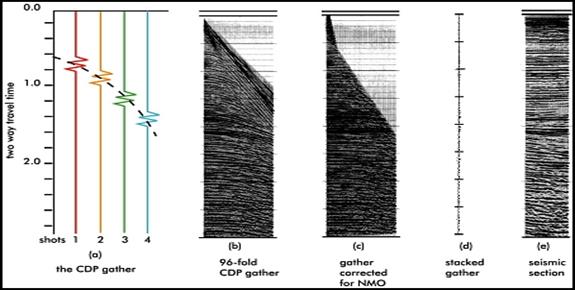 Causes true reflection pulses to enhance one another, and hopefully, random noise will cancel out. This process is repeated for all the CDPs on the survey line. The stacked and corrected wiggle traces are displayed side by side to give a seismic section. Most seismic sections used by the oil and gas industry are time-sections that have undergone a long sequence of data-processing steps designed to improve the quality of the reflections and bring out subtle geological features. For particular purposes, after the principal reflectors have been identified or 'picked', a time-section may beconverted to a depth-section. For this and also for NMO corrections before stacking, the velocities of sound in the rock layers traversed by the section need to be known. Computer analysis of traces during NMO corrections yields velocity values, but more accurate data comes from special velocity surveys carried in wells in conjunction with sonic logging.

Data processing lessens the impact of various undesirable effects that obscure the reflected signals; it also compensates for some intrinsic deficiencies of the CDP method. Undesirable effects include multiples, where the sound is reflected repeatedly within a rock formation and, because this takes time, registers as a deeper reflector; reflections between the water surface and the seabed are a similar phenomenon known as ringing.

Diffractions are hyperbolic reflections from the broken end of a reflector; they mimic arched formations. Random noise, mainly unwanted reflections from within rock layers, horizontally propagated and refracted sound, bubble pulsations from the airguns and other effects also need to be reduced. Stacking reduces multiples and random noise but the main computer processing steps are deconvolution, mutingand filtering, and migration. Deconvolution ('decon') aims to counteract the blurring of reflected sound by 'recompressing' the sound to the clean 'spike' emitted from the source. The result is clearer reflections and the suppression of multiples. Muting cuts out parts of traces embodying major defects such as non-reflected signals; filtering removesundesirable noise to enhance the best reflections. Finally, migration corrects distortions caused by plotting inclined reflectors as if they were horizontal and vertically below the midpoint between shot and receiver; it also collapses diffractions. In this process, the seismic energy is relocated to its true subsurface location, ready for interpretation.

Equipotential-line and potential-profile methods. | Notion of DC resistivity method | WORDLIST | Terms and Vocabulary | Reflection Seismology | Form nouns from the following verbs. | Match the pictures with the extract for illustration of which they can serve. | Метод преломленных волн | Applications of Reflection Seismology | Terms and Vocabulary |